What is the MILA? – genxfxtrader

MILA is the Latin American Integrated Market MILA born of the agreement ebtre the Santiago Stock Exchange, Colombia and Lima, as well as Deceval, DCV and CAVALI deposits. Since 2009 began the integration process to negotiate the equities in the same market for these three countries. The mission of the Latin American Integrated Market (MILA) is to foster the growth of financial business and try to become the most attractive region in terms of market capitalization market. In the organization of the Latin American Integrated Market (MILA)the respective bags do not lose independence and regulatory autonomy. What it is maintain continued growth as an integrated market, which benefits them as it seeks to increase trading stock.
Encourages more attractive and competitive, bags with greater trading and liquidity. Favors a greater number of financial products traded, to which investors can access. It facilitates the creation of new investment vehicles. Technological integration by facilitating trade and the adoption of international standards is driven. In Colombia we find these associates brokers to MILA
More information: Brokers Colombia

thank you very much for the information, I like that everything is unified, and provides access to investment, reducing costs and we will find it cheaper to invest in stock market.

Now it lack the Colombian economy recovering to finish their companies rise.

Press have reported that the Financial Supervisory Authority has issued the rule that allows companies to conduct emissions in the MILA (Integrated Latin American Market) the broadcast is valid for three integrated in the MILA (Colombia, Chile and Peru) markets.

Thus an investor who enrolls in one of the MILA emissions will simultaneously (integrated form) in all three markets (Colombia, Chile and Peru). It is enrolling in a single market, to facilitate access to securities underwriting.

The idea is that emissions are equal for all three countries, unifying and streamlining the market, reducing the costs.

the end is a way to expand the market and facilitate access and financing companies in the primary market. Thus it will provide more liquidity to all actions, thus improving the situation of companies that currently have lower liquidity.

Currently, the Ministry of Finance will authorize the issuance through MILA companies in Peru and Chile.

This advance will increase the trading volume as companies of Chile, Peru and Colombia will do so in an integrated market, as mentioned above, both from Colombia through MILA also be accessed emissions and securities of companies from Chile or Peru.

It seems to me a good progress to integrate these markets What do you think?

MILA Market will host a regional market of currency common among the countries that make up the MILA.

MILA aims to reduce the cost of exchange for transactions in other countries with different currencies.

Larespecto What do you think? It seems very good news, is not it ??

The press says that this week you can buy an ETF of MILA.

Personally I think there is too much correlation between Colombian markets, Peruvians and Chileans. Now, if the Mexican index will add, improve, that behaves something different. 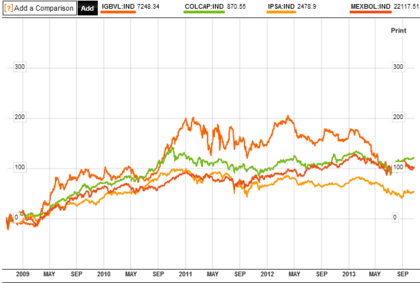 Also You will enter Brazil in the end?

Within two years, mutual funds set up to invest in the Latin American Integrated Market (MILA) have recorded a significant drop in terms of funds raised.

During the period studied, Colombia and Chile recorded the removal of one of the funds offered in each country. Celfin is the case of Infrastructure (Chile), which in December 2011 attracted 22,857,000 dollars, which placed him as the clear market leader. In the case of Colombia, ING Mila ceased to be operational, with 1,073 million in December 2011.

Peru, however, is the only one of the three markets that manages to increase the funds raised between December 2011 and December 2013 total , increased by 48%.

Was the MILA a ruin for countries?