The first futures contract on Bitcoin is born – genxfxtrader

The  Chicago Mercantile Exchange ( CME )  has announced the features of the new futures contract on Bitcoin . Chicago Stock Exchange, which offers the widest range of products in the world, will start negotiating the new future of Bitcoin later this year .

This is a novelty of fundamental importance for the market of Bitcoin , which has soared in recent years but whose reputation has always suffered from a lack of checks and suspicions about its use for illegal activities and tax evasion.

The fact that the Bitcoin is negotiable in one of the world ‘s main squares gives a new status and probably warrants a new audience of investors who will approach this asset. The Bitcoin and criptomonedas generally considered could soon begin a new asset class and as such, find a place in the portfolios of a growing number of investors.

The Bitcoin is a digital currency that is created and maintained in a decentralized manner without the intervention of a central authority (unlike traditional currency issued and controlled by central banks).

Bitcoin transactions are managed collectively by a point to point network  (peer to peer network) inserting a string overall block publicly accessible and known as blockchain.

Validation of transactions carried out in the nodes of the network called Bitcoin miners who, as compensation for this extremely complex computational task, given a certain number of bitcoins.

As time passes, it becomes increasingly difficult in technical terms and costs to obtain Bitcoins through mining. As a result, more and more participants in this market are made with Bitcoins purchasing them from those who already own rather than through mining.

The introduction of Bitcoin dates back to 2009 when Satoshi Nakamoto published this document . Satoshi disappeared into nothingness in 2011 and his identity was never revealed. It may not be a single individual, but a group of people.

Who would have invested $ 1,000 in bitcoin in July 2010 it would now have approximately 88 million dollars!

The Bitcoin future of CME will be based on the index  CME CF Bitcoin Reference Rate (BRR) . Presented by the CME in November 2016, this index is calculated once a day (at 16:00 London time) by the CME Group and  Crypto Facilities Ltd   based on quotations in Bitcoin four bags: Bitstamp, GDAX, ITbit and Kraken.

The settlement of the future will be in cash . On the due date there will be no delivery of the underlying Bitcoins, but an amount is exchanged corresponding to the difference between the cash value of the contract when the future price has been bought or sold and the reference price at maturity.

The underlying futures contract will consist of five bitcoins and minimum price fluctuation will be 5 dollars per Bitcoin ($ 25 per contract).

We include below the specifications of the new contract as reported by CME.

You may also be interested in :
How, how and why investing in Bitcoin. 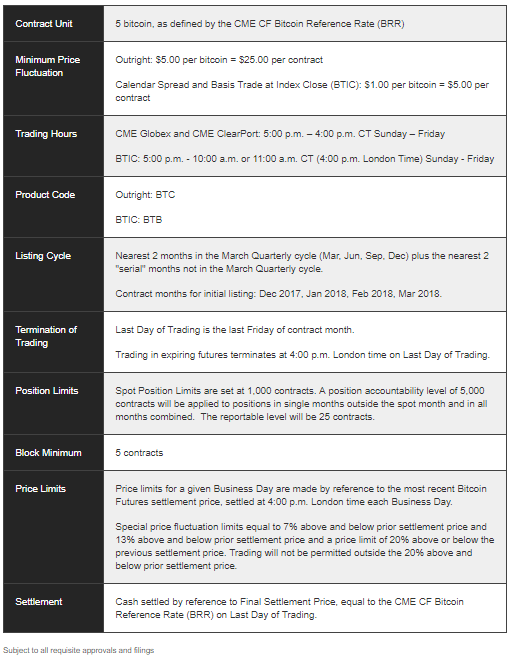 Are still distrusts with bitcoin, but the reality is that following developments in the markets. Now negotiating contracts Futures on bitcoin. Interesting.

Good afternoon. I have not been able to find key information about these contracts:

2) brokers online that offer both Spain and UK.

Does anyone know something? Thanks in advance and happy 2018 to everyone.