The dynamics of the oil market – genxfxtrader

The price of oil is undoubtedly one of the main variables that determine the trend of global financial markets. In this period, the weakness of oil prices is attracting much attention from the media about the data related to the trend of reserves, OPEC decisions and all factors of geopolitical and economic order that could affect the future dynamics .
In this post we aim to provide an introduction to the dynamics that govern the oil market.
Crude oil
Let’s start by defining what we mean when we speak of oil in the context of financial markets.
Oil prices are commonly referred to which the media is that of crude oil  (crude oil). It is defined as crude as it must be processed (refined) to produce products such as gasoline, diesel, heating oil, aviation fuel, lubricants, asphalt.

Crude and main benchmark
The two main types of crude oil in the market are the WTI (West Texas Intermediate) and Brent .
Both can be defined as ” light” or “sweet”.
By  light   it is meant a type of low density oil while sweet indicates a low sulfur content. The low density makes this type of oil is easy to transport and refining, while the reduced sulfur content reduces impurities.
WTI (West Texas Intermediate). WTI is a mixture of different qualities of light sweet crude  mined in the United States. It is normally transported through a network of pipes that has its own connection point and storage in Cushing, Oklahoma , so he nicknamed “The Pipeline Crossroads of the World”. If we buy in the WTI market, delivery is understood to be in Cushing. WTI serves as a benchmark for production in North America.

BRENT. Brent is one of the four types of oil (Brent-Forties-Oseberg-Ekofisk, or  BFOE ) extracts from different parts of the North Sea . When we are talking about Brent we refer to a “basket” of types of oil (mentioned BFOE). Therefore, we should speak more correctly Brent blend . From the North Sea Brent crude is transported by cargo ships all routes world. One of the main points of delivery is the island of Sullom Voe, in northern Scotland. Nearly two – thirds of world oil production are valued at the price of Brent since this serves as a benchmark for much of the production in Africa, the Middle East and South America. WTI crude oil is slightly better than Brent because it is lighter and has lower sulfur content. As we shall see, this is not necessarily reflected in a higher price of WTI, beyond the quality , other dynamics come into play in determining its price. What determines the price trend? Among the determinants of the evolution of oil prices on world markets issues as geopolitical events, expectations about economic trends, exchange rates, environmental policies, decisions of OPEC, logistics and infrastructure are included (see here a number of interesting graphics on the variables that influence oil prices). Global economy . In general, a strong economy means more demand for energy sources that in turn support oil prices. In this context, besides the US and Europe, receiving great attention the development of economies such as China and India, which are major consumers of energy. The sharp fall in oil prices in early 2016 was based on fears of a slowdown in the Chinese economy. Weather conditions. A variable as the weather can be reflected in the price of oil, both the demand and the supply side . On the one hand, the colder or milder weather than expected may vary energy demand, causing fluctuations in demand for refined products (heating oil for winter heating in case of very cold temperatures) or fuel (little rainy and mild summers encourage car use and consequent fuel consumption). Operators around the world are constantly prediction models such as the Global Forecast System Model . Values HDD – heating degree days – or CDD – cooling degree days – that is, the days required for heating or cooling an environment, it is generally interpreted as alternatives to describe the tendency of energy demand. On the supply side, weather conditions can have an impact on production and transportation of oil. For example, a hurricane in the Gulf of Mexico or a storm in the North Sea could have negative effects on production. Exchange rate. 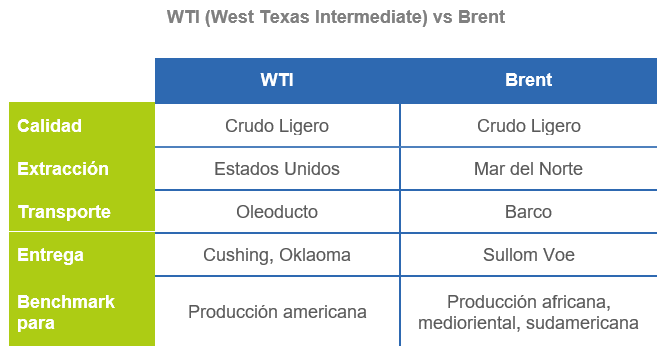 Oil is traded in dollars on world markets so that fluctuations in the US currency affect the value of oil for all countries that have a national currency other than the dollar itself. When the dollar strengthens oil becomes more expensive when expressed in terms of other currencies. Consequently a significant inverse correlation between the price of crude oil (and generally all raw materials) and the dollar recorded.
Geopolitical factors. Geopolitical tensions (eg Middle East) cause interruptions in production and distribution of oil from the regions concerned, which affects the price level.
OPEC decisions. The post recent analysis of recent policies of OPEC.
Environmental policies. The authorities can introduce regulations to protect the environment from damage caused by the activity of extraction and refining of oil you can end up resulting in additional costs for oil companies. For example, after the disaster of Deepwater Horizon in the Gulf of Mexico in 2010, the Obama administration imposed strict precautionary measures on offshore drilling and banned throughout large areas of the Arctic and the Atlantic. All these measures will be reconsidered by the new Trump administration, which is closer to the approach of oil companies vision.
Supply and demand. The relationship between demand and supply of oil is the key factor in determining the dynamics of medium – term price of crude oil.
Numerous reports and publications on supply and demand are published intra-weekly, weekly and monthly cadences of government agencies ( EIA for the United States of America), trade associations.
( API , American Petroleum Institute also USA, the OPEC for the Organization of Petroleum Exporting Countries), national research organizations ( Genscape ) and international ( IEA ,  OCSE ) and oil companies ( British Petroleum and Shell among the top ) and / or the energy sector ( Baker-Hughes with particular emphasis on the development of new oil wells, in both the US and internationally).

Reports on reserves
receive great attention the  weekly inventory reports on US oil reserves published by the EIA ( Energy Information and Administration , ie energy statistics department of the Ministry of Energy of USA). The United States being the largest consumer and importer of oil as well as the third largest producer of crude oil, operators study this report to determine which is almost in “real time”, the dynamics of supply and demand in the US. UU. and then, by similarity, that world.
The most important reports on the evolution of reserves are published regularly: Two particularly important differential Much of trading oil on world markets is in the form of spreads ( spreads ) on different qualities, products and deadlines. Two differential, in particular, are essential. The spread Brent / WTI , the difference between the price of Brent and WTI. This differential has remained fairly low and stable until about 10 years ago. From that moment, the factors related to the increase in supply of oil in North America and geopolitical dynamics in North Africa and the Middle East led to sharp fluctuations in the differential of up to about $ 30 / barrel in favor of Brent in 2011. the appearance of the ” shale revolution”   in the United States (the US production in 2017 was approximately 80% higher than 2007), which was accompanied by increased production oil sands in Canada and imports into the United States, produced a significant increase in the supply of WTI, while on the other hand Brent was affected by geopolitical dynamics in north Africa and the Middle East have significantly reduced supply oil not American. The price differential between the two benchmarks fell hard, reaching the current 3 $ a barrel, following a series of circumstances that have increased both the production potential of Brent crude (agreement between Iran and the P5 + 1 2015, significantly reduce threats to production in Iraq and Libya) and the ability to export crude to the United States (in December 2015 , the Obama administration decided to remove the ban on exports of oil to the United States after decades ). The ” crack spread “ , the difference between the price of refined products and crude oil prices. This is spread is the profit margin from refining companies , in their core business, they buy raw materials and sell refined products. When the spread between finished products and crude grows, the profit margin increases refining companies. Although the trend in the price of refined products tends to reflect the crude oil (which constitutes about 70% of the cost), these may be influenced by factors unrelated to the price of oil, such as weather conditions colder than increase demand for heating products.