I do not see so bad the IBEX, trading at its historical average of PER, this is 15. Inditex trades at a very high PER,  Telefonica trades at a PER 11, which is not so low for a debt of 46,000 million.

To lose, I think the ibex can drop 2,000 points and it would be no big deal. Nor if the rise would not be a quote anything strange historically speaking, ratios.

What is historical is the Dow Jones PER 26, only 2 times in 150 years was higher: the crack of 29, and 2000 with technological and market bubble in general.

Tuesday 13 of this month, increased my exposure to financial institutions short Bankia and Bankinter, ratificándome with it in its bearish continuation.
Given the progress and breaking new media, proceed to protect positions with stop at zero and closing the lotaje that I increased, thereby ensuring benefit my portfolio and let the rest run. 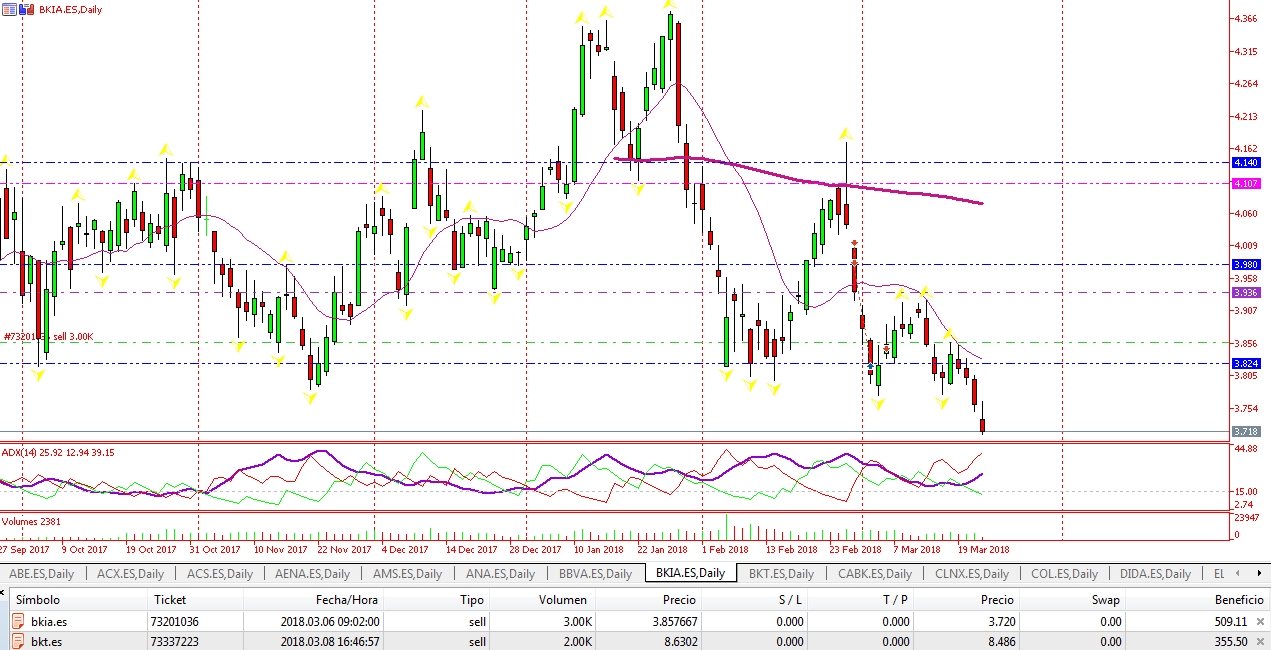 A greeting and very good Trading.

I am with you in shorts in Bankia, with the state selling its 60% stake, certainly down. Although I bet the Dow.

Tempers again become cloudy in financial markets. In principle, the spotlight would fall on central banks to match in less than 24 hours meetings of the Federal Reserve and the Bank of England. But the main focus of concern shifts
in monetary policy to trade . In the day yesterday as investors stepped up border caution with information on retaliatory measures against China would be studying US tariffs.

The agenda today includes the signature, by
Donald Trump , a memorandum of trade measures against “economic aggression of China”. According to the newspaper The New York Times, advances will announce
tariffs and fines of up to 50,000 million against China to offset the trade deficit with the Asian giant.

The latent fear a trade war role remains part of central banks. Late yesterday the
US Federal Reserve met expectations, and
Jerome Powell premiered at the presidency with a rise in interest rates . This morning, the central bank of
China has responded with an increase in interbank rates . The subsequent message from the Fed was somewhat more cautious than expected, to limit to two the additional increases that arises for the remainder of the year. Part of the market had anticipated other extra surge throughout 2018 after the February data on wage developments.

The larger movements focused on the foreign exchange market, with further falls in the
dollar . The
euro has now reached close to $ 1.24, but a trade war fears to cool its rise. Community currency retracts toward $ 1.23. More consistent is the escalation of the
pound . Not only it has strengthened above the barrier of $ 1.40. In today’s session also it exceeds $ 1.41, on a day that could trigger portfolio adjustments in the pound depending on the outcome of the meeting held by the
Bank of England . Analysts closely watch both the outcome of the vote as messages that can confirm a rate hike in May.

The
European markets await news about US trade policy, and on the Bank of England, with a new dose of caution. Initial hesitations give way to losses of around one percentage point. The German Dax reduces its margin above 12,000 points and the FTSE record intraday lows below the barrier of 7,000 points. From the IFO Institute warn of deterioration in expectations of German exports by US protectionist policy.

The technology sector receives a new bearish reference. United Internet deflates about 10% after publishing its results. The sector of building materials today takes center stage with HeidelbergCement. The second largest cement maker in the world will raise the dividend after posting a record and thanks to higher than expected synergies from its integration with Italcementi benefit. On the London Stock Exchange, IG Group, under pressure in recent times by the increased regulation on CFD, receives a favorable verdict market posting a
record revenue thanks to the extra impetus given by the boom of trading cryptocurrency

in 6 long term, is good buy, but in the long term.

For panic mode are in, as this support will not stand … the next stop are 200 points

The
US president ,
Donald Trump , announced Thursday tariffs and fines of up to 50,000 million against China to offset the trade deficit with China,
as reported by the newspaper The New York Times .

The new charges will affect a hundred categories of imported goods, from shoes and clothing to electronics, says the New York newspaper.

Trump intends to sign a presidential memorandum that also limit certain investments from Beijing to counter its ambitious industrial policy in sectors like mobile technology and artificial intelligence. The signing is scheduled for 12:30 local time (1630 GMT) in a room of the White House.

Confirmed tomorrow, these will be the toughest trade restrictions imposed by Trump to another country and go beyond the controversial global tariffs on aluminum and steel , which also affect Beijing-, estimated at 33,000 million dollars.