Today’s session saw a big rise in price the dollar on Monday, when up $ 8.40 on the domestic market.

According to Samuel Levy, an expert on currency:

Despite not having major macroeconomic figures highly important for the markets, the dollar gains ground relative to its emerging peers on a day where raw materials show a new sign of weakness where compounded by the negative performance of Latin American stock markets in today. 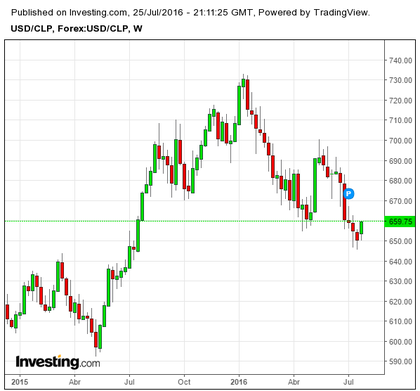 The dollar closed today, the first day of August, with a sharp rise of $ 2.30 in the domestic market after the collapse Friday by disappointing quarterly GDP figure for the United States.

Friday July 29 currency had recorded losses of more than $ 8 after it became known that the growth of the world ‘s largest economy was only 1.2%, far below the 2.6% expected by the market, which makes less likely one rate hike this year.

scenario for the dollar in the medium and long term it will be conditioned by the decision of interest rate and well as Asia behave in the face end of the year … With this in mind and according to the expectations, we can see a relatively stronger dollar the national currency staying above $ 654.5 pesos per dollar with possible roofs around $ 675 / $ 680. 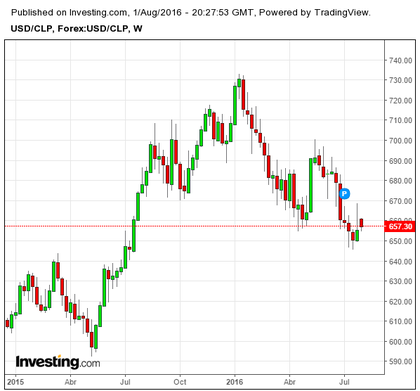 The exchange rate of the dollar relived a bad day today, after recording a $ 2 drop in the domestic market.

According to market analyst, Ricardo Bustamante:

The dollar exchange rate shows kicks after a slightly higher open, by the weakness of the greenback globally and appreciation that record the currencies in the region … to keep this scenario, especially with the rise shown by the Brazilian real has boosted the Chilean peso, an eventual break floor of $ 650 could prompt further declines, which would have the next technical levels of $ 647 and $ 643 in the short term.
The dollar recorded in the day today an incredible decline in its trading and reached its lowest level since mid-July 2015 .
The US currency continued to plummet against the Chilean peso as the day unfolded, closing at points $ 642.90 $ 642.40 seller and buyer .
According to Diego Mora, market analyst at Xdirect, today the Central Bank will deliver its decision on monetary policy rate, Hoping that the current rate of 3.5% is maintained.
However, he said:
What might stop falling dollar are GDP data next week we will receive, since the projections remain bearish. 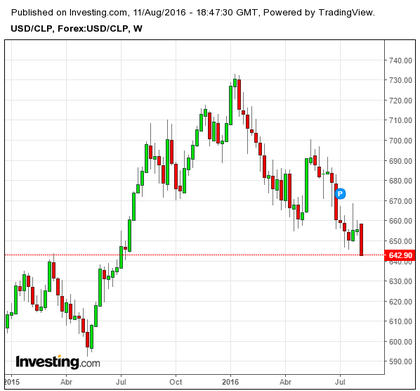 The exchange rate Dola r reached its highest value in 2 months on Tuesday, adding its third consecutive rise in the domestic market.

We must be very cautious in the coming days the dollar since Thursday start economic symposium that will be sponsored by the Federal Reserve’s expected meeting of Jackson Hole, which will assess frames monetary policy for the future of American … however, the big event is expected on Friday where the president of the Fed , Janet Yellen, give his speech monetary policy which could declare what the whole market is expecting about rise in interest rates.
Analyzing the chart of USD / CLP see that the bearish trend during 2016, reaching lows in mid-August. At this point he began to regain ground, reaching $ 682.72 in early September, when he lowered the price.
Currently the price is $ 669.60 in pesos. How do you see your evolution?
Although at the beginning of the week, the exchange rate was stable until Thursday when he started with a depreciation of $ 3 due to the weak Chinese trade data.
Moreover, the evolution of the DXY showed an upward trend until Wednesday, after holding steady.
How will the evolution this week?
The dollar began to fall in the local market due to a new rise in copper prices on international markets, as well as a depreciation of the currency globally.