We have the closing review of the 35 IBEX Intereconomía radio with the collaboration of Gerardo Ortega of the day 03.09.2018.

The review is very comprehensive and worth checking out, also incorporates graphics

A greeting and good weekend!

Tomorrow I will know to explain what happened today

this afternoon I ‘m looking for something interesting

A greeting and thanks

Give opinion and let others give his very friendly .Thanks

Draghi did not substantially alter the speech on Thursday, although he was more optimistic about the economic outlook. “The latest economic data and the results of recent surveys indicate continuing dynamism of the solid and broad -based growth.”

“Generally, it is considered that the risks to growth prospects of the euro area are balanced. On the one hand, the current positive momentum could reinforce cyclical growth in the short term. On the other, the downside risks remain mainly related to factors of a global nature, such as the rise of protectionism and developments in the currency markets and other financial markets. ”

Now is the unknown when will begin the ECB to raise rates, considering that on the one hand say they would remain low after completing debt purchases this September and on the other hand most optimistic (incompatible with low interest rates) and again shown stress that you can also use fiscal policy stimulate the economy

The last intervention has unseated some analysts, who no longer know how to justify the rates continue to zero if economic prospects are solid:

Is there life after the end of the stimuli of the ECB?

Business results, they say, are good with exceptions. But how much debt you still have the Ibex although rates to zero? They are as good as results to justify current stock prices?

They escaped, ADX and SLR.

In Europe we are more or less stagnant.

Japan Central Bank in its purchase of all Bonds, ETF and it does not seem to change its strategy.

Crude held in support of $ 60 and rebounded strongly

in my opninion in the news highlight what they want. Inflation is at 1.2%, if they raise interest is to keep it below 2%, the ECB estimated to be 1.8% in 2020. Therefore take long until the ECB raise interest. While only have a gun, which is buying assets, they have cut a while ago but still keep saying that as long as needed. I do not see the left in September one , most likely reduce somewhat the monthly amount but continue. The economy is doing well, which is good, and there is no overheating, which is also good. Companies certainly have to reduce its volume and lengthen maturities debt to take advantage of low interest rates and be prepared for hikes in a few years. Half the shares are giving about a 4% dividend, which does not get with any savings product, so we can say that in Europe are at the right price (and that price will fall when they rise to the interests, but until then still many years).

All this talking about Europe, because in the US the situation is different.

Good, invest mainly medium and long term, and I’m changing the portfolio as you begin watching. As everything goes fatal touch invest in gold mines, but until then think that still years away . The Nasdaq is not cheap but is more diversified than when the dotcom. There are biotechnology, artificial intelligence, blockchain (not just convinced me), plus social networking, internet, hardware, etc. That’s why I think it’s safer than before, however I have at the moment no more than 10% invested in technology although I’m valuing expand that percentage.

‘ve looked a little the subject of Inditex, and still see only panic in the market. It seems that the stock market has caught afraid of the sector. On the one hand is the winter season (T4), which has been very bad for good weather. But you can not invest based on
one  season that is already in the past. And on the other side it is the threat of online commerce and trust that Inditex has managed to make that threat a chance. In addition textiles online selling is giving low margins, so sooner or later online companies will have to raise prices, and then see if they maintain market share. In the medium and long term Inditex is an opportunity.

I have also looked at the figures Inditex, and I made my own prognosis (pessimistic) for the year 2017. I calculated that 40% of sales (25% Asia and 15% other countries) have entered into T4 20%, and 60% (Europe and USA …) for sale dropped 10% T4 by the weather. That would mean that sales in T4 alone have risen by 2% (JP Morgan is more pessimistic than the consensus of analysts and still has a sales increase of 6% in Q4, compared with 10% the rest of the year). In my estimate annual sales would rise only 7% versus 10% expected, and EBITDA, EBIT and net result would be very similar to 2016. Which I suppose is meant as “stagnation” of the results, and I guess that’s why he has action fallen to 24 €. At that value would give a dividend of 3% or so. I leave the summary of my “pessimistic” estimate, rounded in thousands of millions: 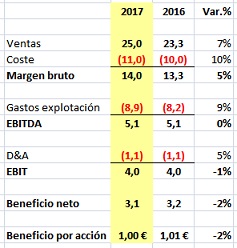 The current price would be justified if slightly pessimistic outlook is fulfilled and Inditex was really stagnate, but that last one does not seem realistic. Although it is known that the bag does not always follow logic.