How it is determined whether the price paid for a particular investment is suitable compared to its real value?

A metric often used in the field of action is the P / E ( price-earnings ratio ) , which relates the price paid with the profits produced by the action or individual index. A P / E equal to 25 means that the market is willing to pay 25 euros for every euro of profit.

To see if a value or index is overvalued or undervalued, the P / E compared to its historical average or the P / E of comparable investments .

Suppose we observe a P / E higher than the values observed in the past. If we assume that the value of P / E should in any case again over time their average value, this may occur through an increase in the denominator (the E of earnings or profits) or a decrease in the numerator ( P or market price).

A high P / E may, therefore, indicate that investors anticipate strong growth in future earnings and are willing to pay more for a unit gains today. However, if a P / E high ratio is considered unjustified, it would result in an overstatement of title or index in question in relation to its core. In this case, it would fall in market prices to align the P / E with fundamental by reducing the numerator (P).

One problem with this type of measurement is that profits tend to have fluctuations cyclical steep. For example, in times of recession, a strong temporary contraction of profits could increase the value of the P / E by misrepresenting the representation of an overvalued market just as would be the time to buy. In the first half of 2009, the drop in profits caused by the financial crisis caused the P / E of the S & P 500 jumped to 123, the highest in history.

Who had relied only on the P / E would have judged that the market was overvalued when it was one of the best times in history to buy. 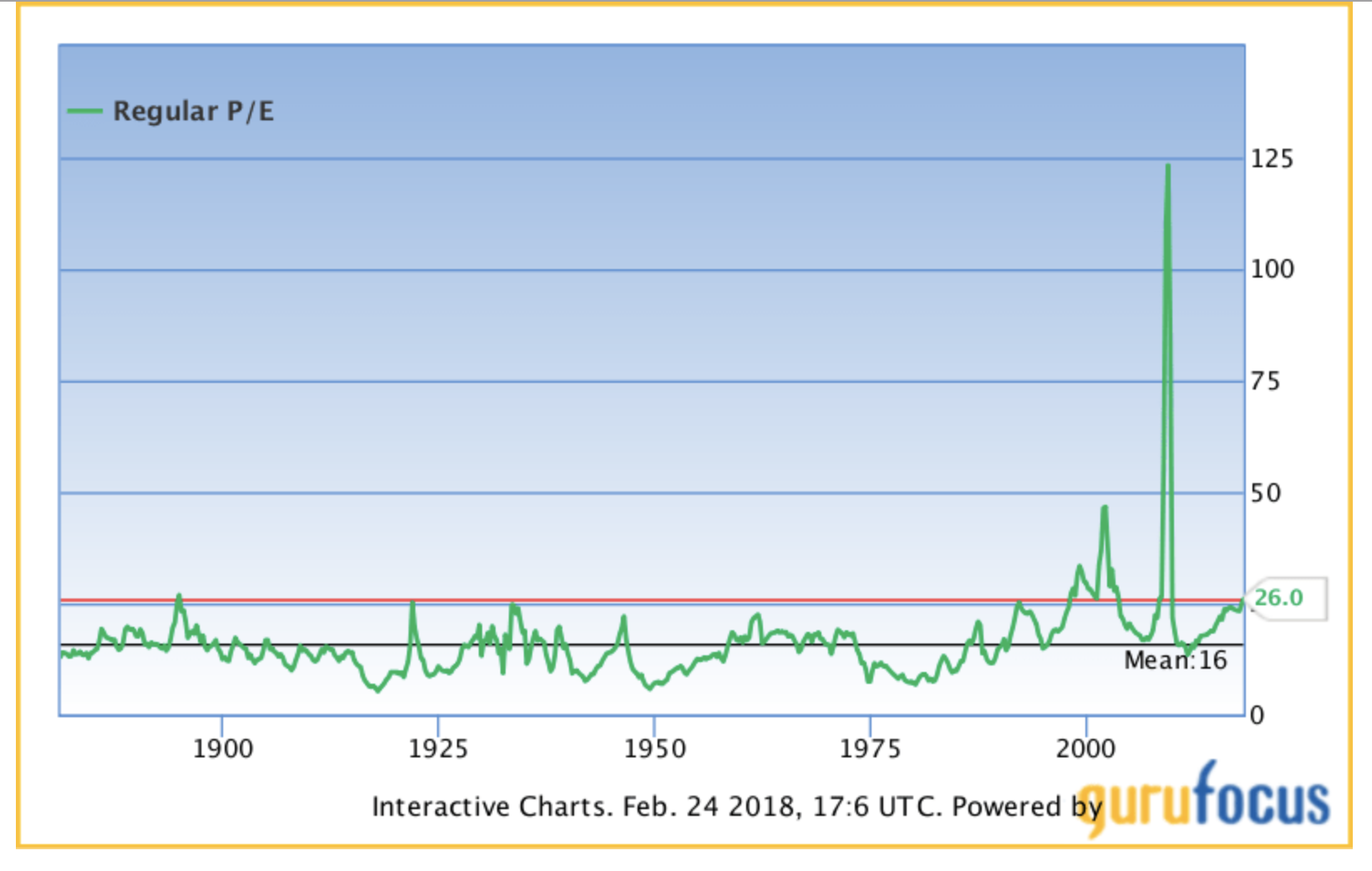 In 1998 Campbell and Shiller presented a variant of the P / E, in the denominator, rather than a point value of profits (earnings) considers the average of the earnings of the previous 10 years adjusted to take account of inflation.

This measure, known as CAPE (cyclically-adjusted price-to-earnings), or Shiller P / E, had immediate success also because of its ability to predict the technology bubble would explode shortly after.

The fact of using the average earnings of the last ten years that suffer much less sudden CAPE compared to the P / E traditional changes. 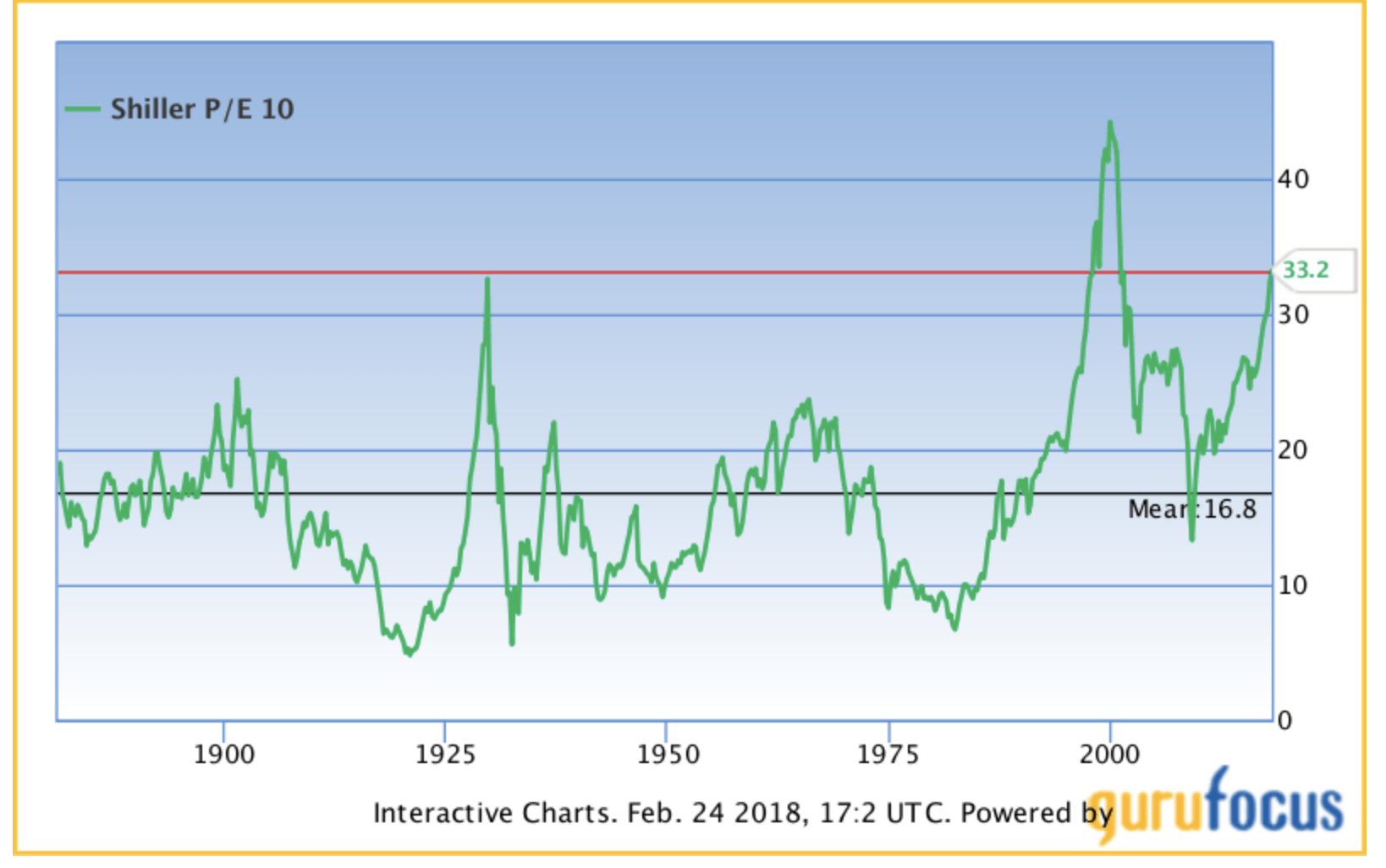 Globally, the CAPE can be used to discover which of the global equity markets offer more value. Low values may indicate CAPE undervalued markets that represent a good investment opportunity, while particularly high values of CAPE may sound like an alarm bell.

Let ‘s see what the situation was in terms of CAPE worldwide at the end of 2017. 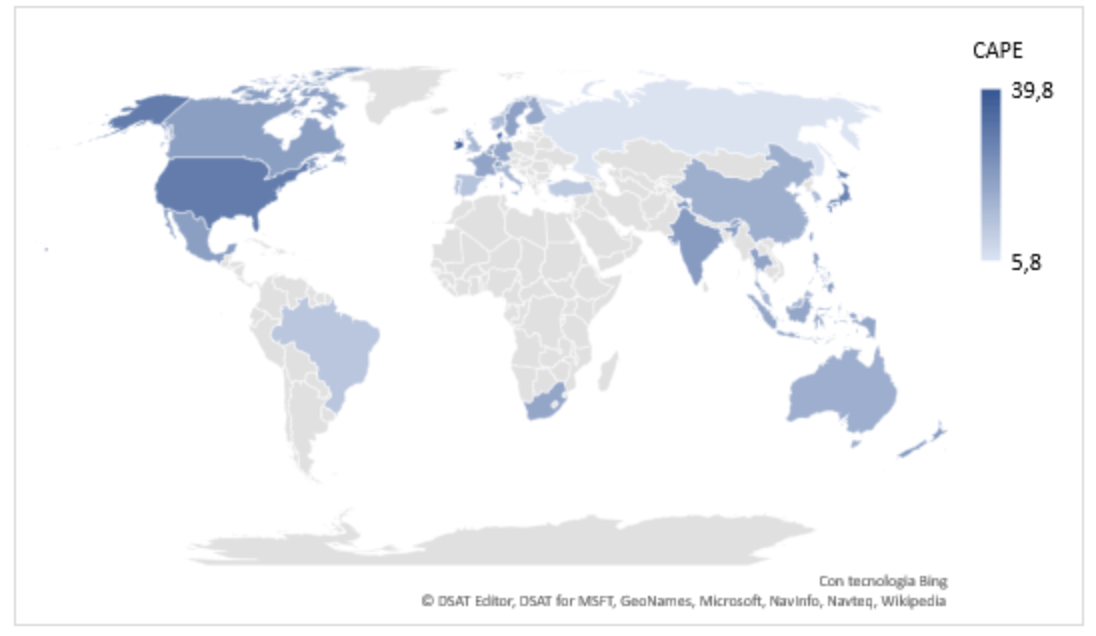 What we really want to understand is whether there is a relationship between the value of CAPE and long – term returns of the equity markets in question.

Robert Shiller pointed out that the value of CAPE is inversely related to the performance of the S & P 500 over the next 20 years. A market starting from a very high CAPE tends to produce smaller yields in the following years compared to a market that begins with cheaper CAPE levels. Therefore, a high CAPE indicates a possible overestimation condition, while a low CAPE is a possible understatement.

Starcapital excellent research measured the performance of some stock markets for 10/15 years, compared with the different initial levels in terms of CAPE. 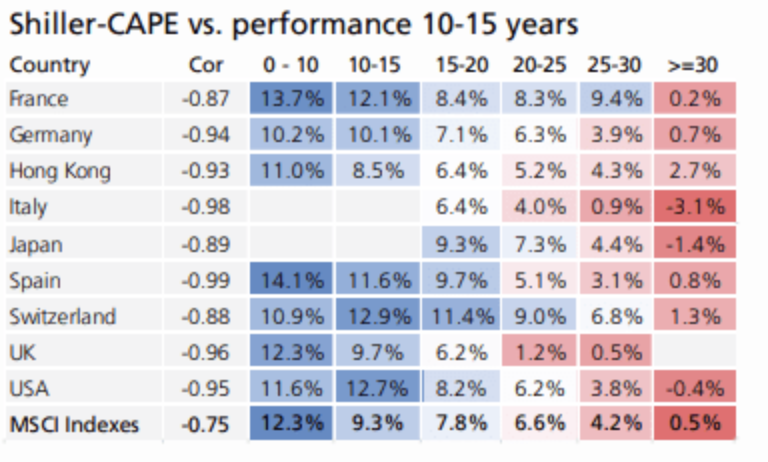 As we can see, the inverse relationship between the value of CAPE and yields in subsequent years is very significant. In all countries, low CAPE values are followed by high returns, whereas high values of CAPE remain low yields.

Is it enough out of the stock markets of countries with a high CAPE and buy those with a low CAPE?

No, unfortunately, the reality is a bit more complex. CAPE is very effective in predicting the long – term returns, but does not work well as a tool for timing the markets.
A market can remain overvalued or undervalued for years . Therefore, we recommend not only use this indicator for investment decisions.

One possibility is to combine CAPE with indicators such momentum . The best place to buy a market is undervalued when interest in buying by investors begin to raise the price, causing an upward movement of inertia.

This is the reason why the momentum and value are often combined. CAPE (value) identifies which markets are overvalued or undervalued, and the momentum is optimized in terms of timing of market entry and exit.

What does the CAPE on market valuations during this period?

We are probably in a historic phase where market valuations are high. CAPE S & P 500 is currently (February 2018)   33 against a historical average of 16.8and even the valuations of most other countries are at the top of the historical range of CAPE.

This may sound as a bell alarm even if, as mentioned above, does not necessarily imply immediate sale signal.

What it will surely indicate a required reduction in performance expectations of the stock markets in the coming years. CAPE historically above 30 provided yields very low or negative.

However , we must bear in mind that, soon, the extremely low values of profits (earnings) 2008/2009 will range from 10 years in which average earnings are calculated. This will result in an increase in the denominator and a consequent reduction CAPE. Excluding 2008 earnings data, you obtained CAPE 3 or 4 points lower .

In other areas, it also notes that some structural factors could favor CAPE trend to stabilize at higher values than the historical average. These factors include the adoption of more stringent accounting standards than in the past which tends to reduce the value of reported earnings, and overall decrease in “payout ratio”, which results in a higher percentage of reinvestment of profits favoring further growth.

In fact, if the CAPE seen in more recent periods, the average figure seems to settle on higher values. Since 1980, the average in the United States amounted to 21.7.

So we are indeed in the presence of high valuations, but some elements contribute to making the overvaluation is less extreme than would result from simple compared to the historical average.

Another ratio popularized by Warren Buffet is relating the  market capitalization and GDP.

The so – called “indicator Buffet” is given by the relationship between the market capitalization of all listed companies in a country and gross domestic product.

This metric is also used to determine when a market is overvalued or infravolorado. 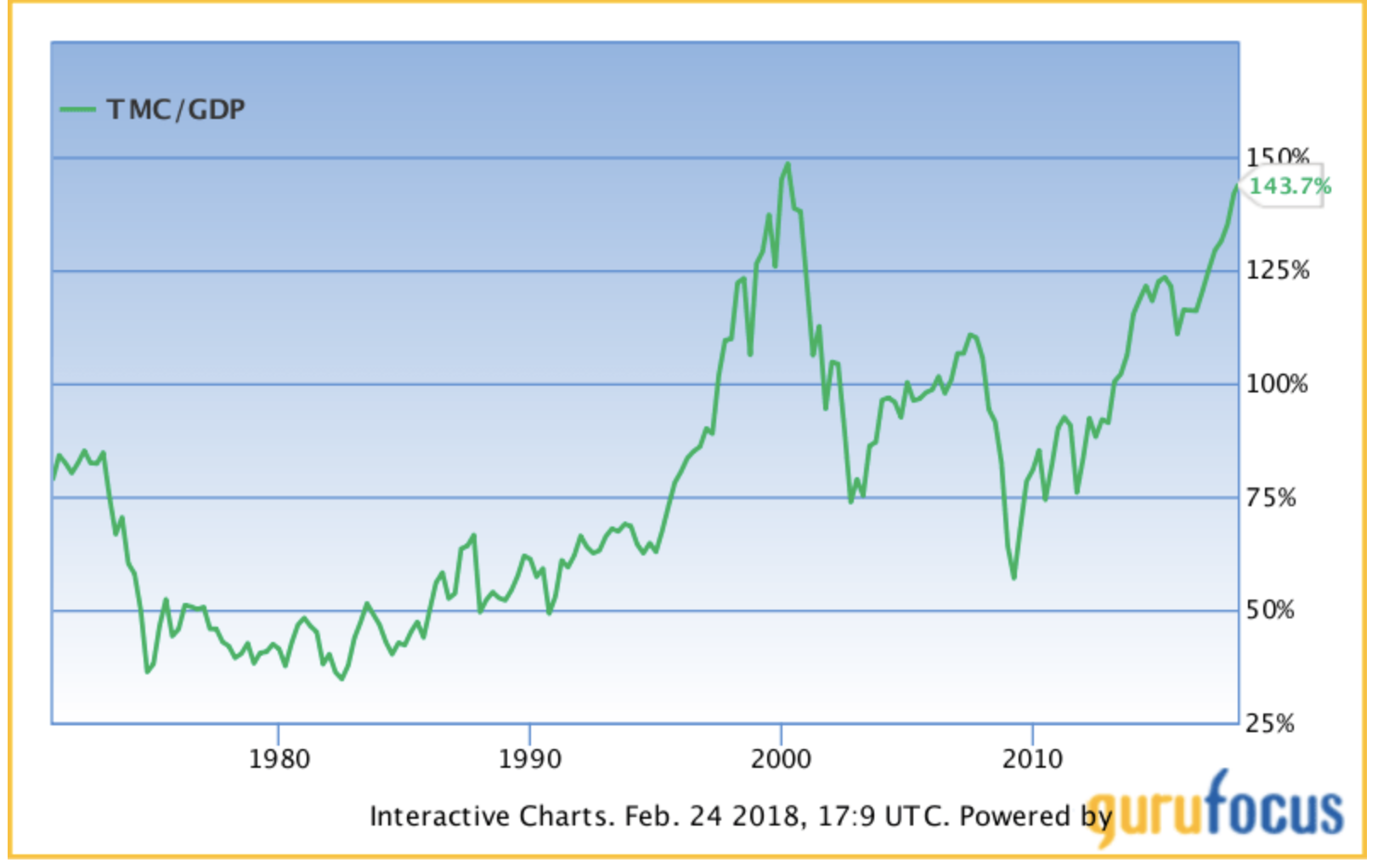 It can be compared with a ” price to sales ratio ” (ratio between price and sales), in which a value greater than 1 indicates an overvaluation.

At this time (February 2018), the value of the indicator buffet is equal to 143% and, therefore, also suggests such as CAPE, a lot of caution regarding the future prospects of the market.